Finally some warm weather! Alpha tree is enjoying the sun too. 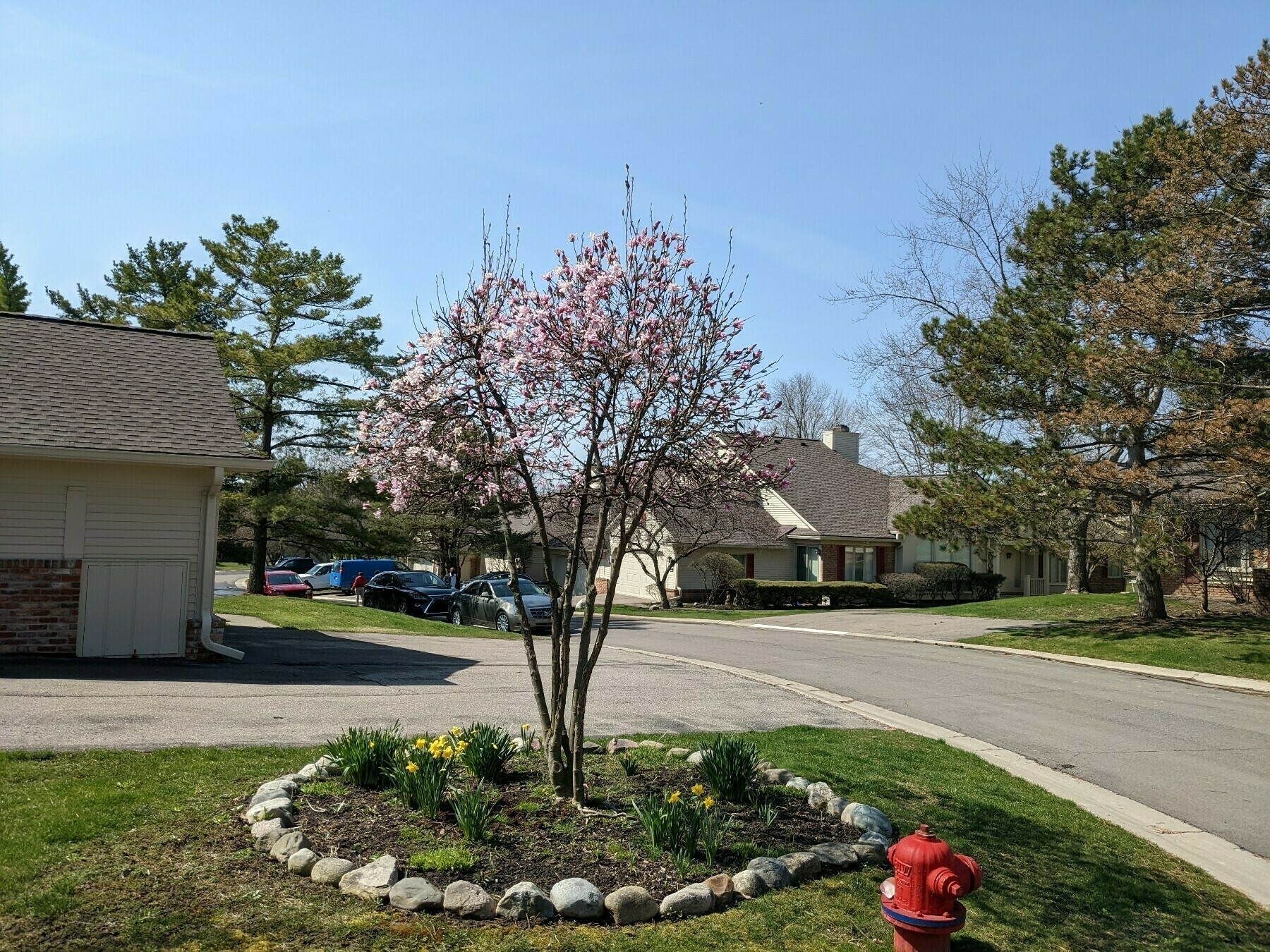 I think Abraham Lincoln would be mad that for what was sacrificed years ago is simply being tossed aside today.

A couple of Easter survivors. I don’t know wild turkies well, but I assume that this is a couple. The picture doesn’t do the beauty of the feathers shining in the sunlight of the front one justice. 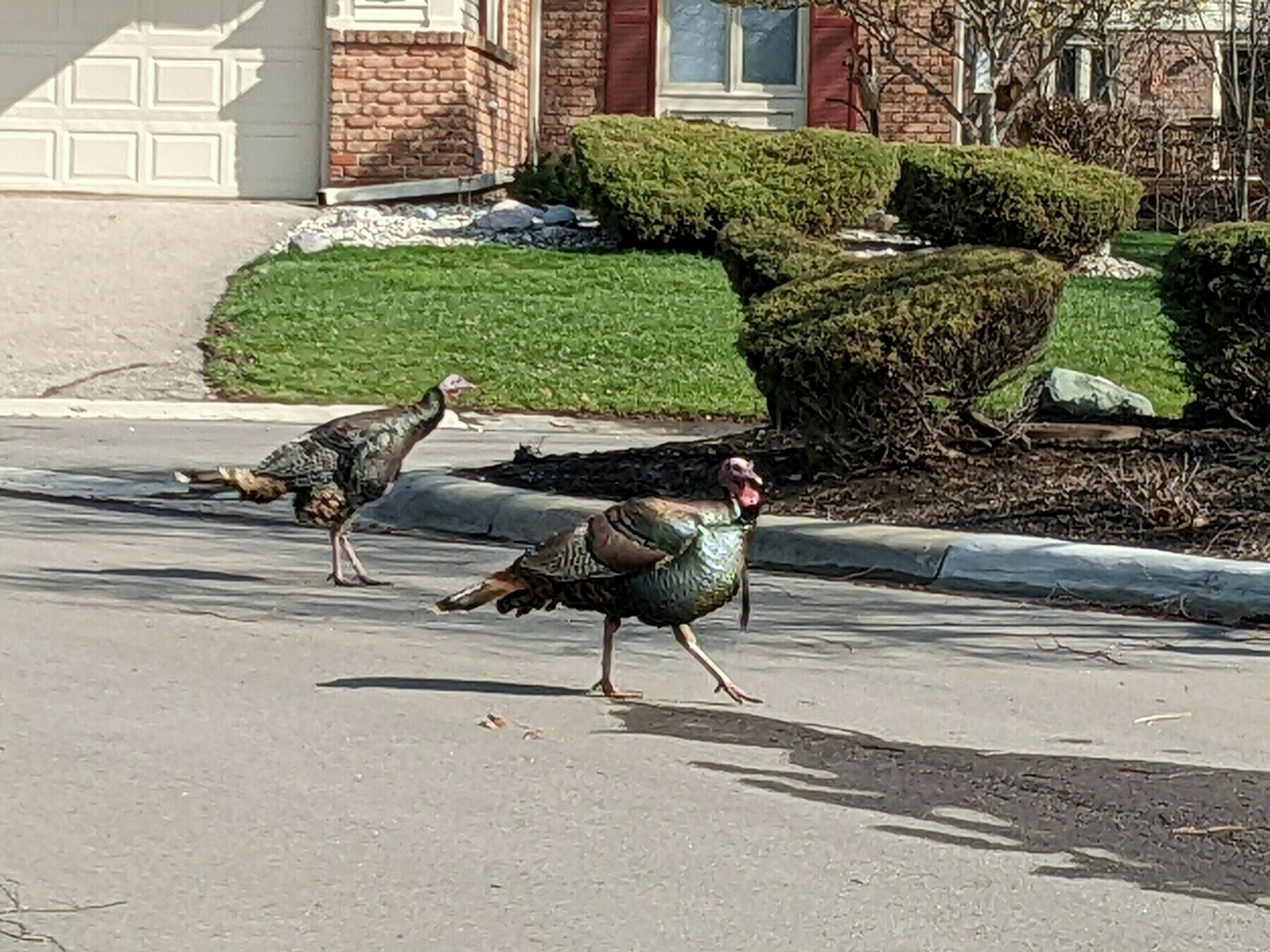 Day 1 of lap 57 around the sun does not have as nice weather (it is snowing) as lap 56 but is a great day none the less. 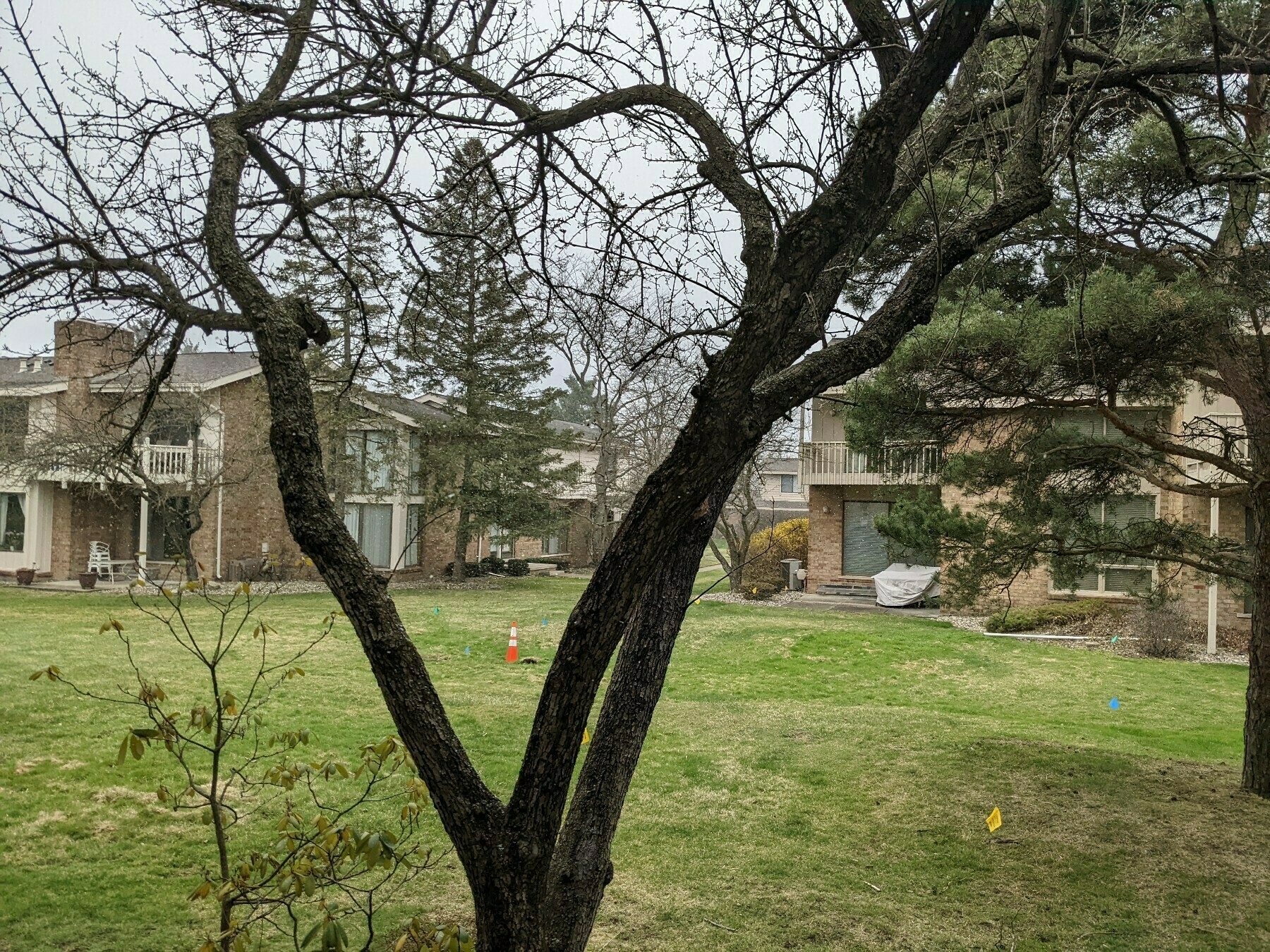 “As the climax of Holy Week and the story of Jesus, Good Friday and Easter address the fundamental human question, What ails us? Most of us feel the force of this question—something is not right. So what ails us? Very compactly, egoism and injustice. And the two go together. We need personal transformation and political transformation.”

Finished reading: The Last Week - What the Gospels Really Teach About Jesus’s Final Days in Jerusalem by Marcus J. Borg 📚

Last year nearly all of the flowering trees near us were blooming but this year most only have buds. However, the first tree to normally bloom has started but has a way to go. 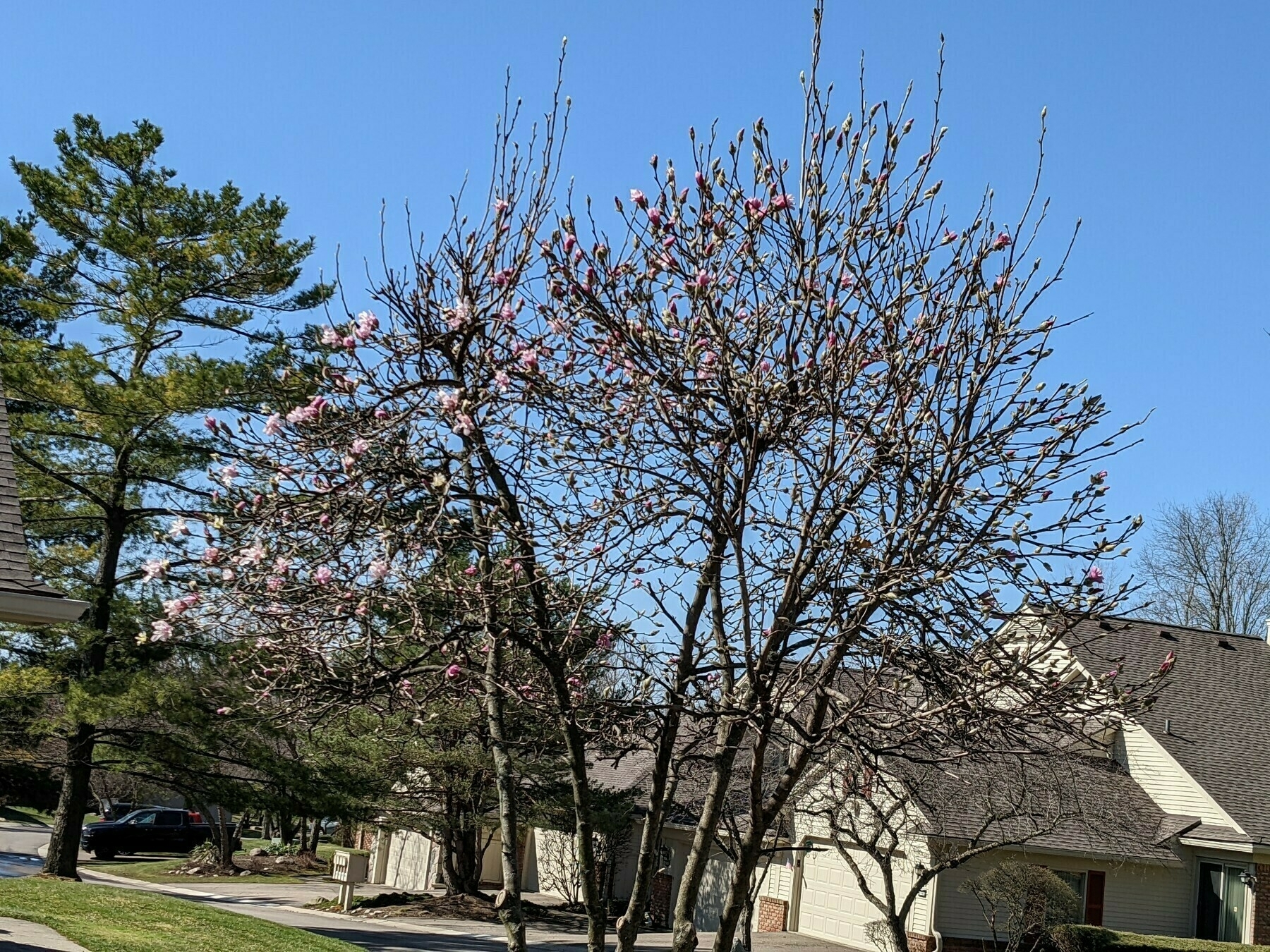 Unlike Axios, I don’t think Musk’s desire for Twitter is as a tech mogul, instead his is simply wearing his billionaire hat. I think the wealthy like Musk are concerned about the negative reputation toward and potential cancel culture of the wealthy. Owning Twitter assures he can’t get kicked off the platform no matter what he writes, so he can freely write things like how bad a wealth tax would be. In other words, owning Twitter is about controlling the narrative for Musk. Also, if Musk owns Twitter Trump will be back on Twitter.

I’ve received my new iPad Mini 6 and I am working through setting it up. I opted to transfer apps, settings and data directly from the iPad Mini 5. First hoop I had to jump is getting through the update to iPadOS 15.4.1, which took several minutes to download and update.

Next thing I notice is that all of widgets on the home screen are all blank white boxes with no obvious fix. First I restarted the iPad, but that didn’t fix the problem. I then realized that while I see all the app icons, the apps are not installed so I need to start up each of the apps associated with the widgets.

I basically have to reinstall every app I use which is a really painful process that I cannot believe Apple foists upon users. And the process is made worse by the spotty nature of the App Store that right now is refusing to install apps.

So, it is going to probably take several days for me to get this Mini fully up to speed.

If Musk wanted to impress me he would get rid of Twitter’s algorithm completely and revert Twitter to a reverse chronological feed, citing how the algorithm is nothing more than feeding an addiction. We don’t need to see the algorithm, we need to get rid of it.

Day 1 of my long birthday weekend, aka retirement practice, has begun. I wish we were not experiencing below normal temperature that is made worse by above normal wind.

An authoritarin often claims to be the sole person who can make someone or something successful. Private ownership of Twitter by Musk has nothing to really do with democracy. His past record has done nothing for me to trust him.

Like many other Android users, when DarkSky for Android went away I moved to AccuWeather. AccuWeather has had a temperature indicator in its persistent notification that recently became just a dot and I’ve learned is that because they now put that “feature” with a Premium+ subscription and also includes AccuWeather alerts, which are supposed to be like DarkSky’s hyperlocal weather notifications. Problem is, I don’t see a way to “upgrade” to Premium+ in the app or in the Google Play store.

Good news. A nasal spray in development to treat COVID is proving to be effective. The ideal of administering nasal spray to mice causes me to chuckle.

Musk is now trying to buy Twitter. Imagine he owns Twitter and then runs for President of the United States. Would he be forced to divest? A precident was set with Trump. If the sale proceeds there should be conditions that if he were to run for office he would have to divest, but I doubt that will happen.

In my eyes a Trump versus Musk Republican primary is lose/lose, but I can see that happen. I think it says a lot when the oligarchs are seeking the office.

I also think the reaction and any action if the sale happens may reinforce my view of how American society is addicted to wealth and power.

I’ve read Jonathan Haidt’s essay, Why the Past 10 Years of American Life Have Been Uniquely Stupid. I can summarize Haidt by saying the algorithms in social media are destroying our democratic society. We have devolved in to the very things that James Madison feared when writing the Constitution.

While Haidt makes many good points I don’t think he gets to the root cause, which I think is our acceptance that it is ok for corporations to make money from addiction.

In the United States we want to put all the blame of one’s problem on themselves. Thus, the only problem with addiction is the addict and the consequences they bring upon themselves. Too many industries like technology, food, service/fast food, alcohol, health, and pharamceutical all profit from addiction. You should note the fundamental nature of these industries.

Even after lawsuits and public trials against the tobacco industry that exposed it knew nicotine is addictive and knew it causes cancer and yet still made money off of selling cigarettes, we give every industry with a business model that uses addiction to maximize profit and wealth a free pass. In the United States it is ok for someone to make a buck off the death of another, and somehow there are even “leaders” in this country who consider themselves pro-life.

In the beginning Facebook and Twitter did not make money, it wasn’t until they introduced algorithms to force content in front of users that they began making money. Research is showing the algorithms are optimized for addiction. And still I think you will find many people in the United States point the finger at people who use these networks as solely to blame and unwilling to restrict Facebook or Twitter from making money because we believe nobody should be restricted from making money.

Everybody knows money is the problem, but like an addict that just can’t do what is in their best interests, nobody is going to do anything about it. Sadly, like most addicts we know, I don’t think our country will seriously address our problems until we hit rock bottom, and I fear for what such a bottom will look like for a country that has accepted children being killed in schools and people in power acting to overthrow the government.

Yesterday I thought about what abstraction exists that can enable one to use the editor of their choice to publish to a web site and concluded git and text/markdown provide that today. We just need “general purpose” editors (read not IDEs) to integrate git pull/commit/push.

I am enjoying watching Detroit sports learn how great a player Javier Baez is, as a Cubs fan I appreciate his unique talent and was disappointed the Cubs didn’t sign him.

I remember a time when shortstops were considered the worst batter in the lineup and that didn’t matter because shortstops were considered the best athlete and most important defensive player on the team. Ozzie Smith didn’t make is his mark at the plate, he was known as the Wizard because of his defense. I always felt too much attention is paid to Baez’s inconsistency at the plate and not enough value placed on his defense, which I think is worth enough to absorb his bat.

Baez was not the problem in the Cubs lineup, the problem was that everyone else in the lineup was not much better. Put Baez in a lineup with other players who make contact and get on base and you can live with his strikeouts, and revel in his ability in the big moments. I think in some ways Baez is like Brett Farve, high risk and high reward. The defense, and in particular Reggie White, made Farve who he was for the Packers because it could overcome his interceptions. Put Farve on the Detroit Lions and he is not a hall of fame player.

I am happy that even though Javier is no longer playing for the Cubs, he is playing for a team in my area that is on TV every day. Baez is the type of player you tune in just to watch, regardless of your interest in the team, much like Cabrera was in his prime. Tiger fans need to remember the incredible plays that he has already made in four games when he strikes out in that crticial moment in July because it will happen and he will still be worth every bit of money he is paid.

Currently reading: The Last Week - What the Gospels Really Teach About Jesus’s Final Days in Jerusalem by Marcus J. Borg 📚

I’ve read this book a few times during Holy Week and doing it again this year.

It is only the second game, but I am already liking this Cubs lineup. Three runs on one hit that is not a home run is not something we saw much since 2016.

RSS is the main way that I gather what I read online and I have been using it for a couple of decades. Not much has changed in how RSS readers (aggregators) work but today I found something intriguing that I would like to have. 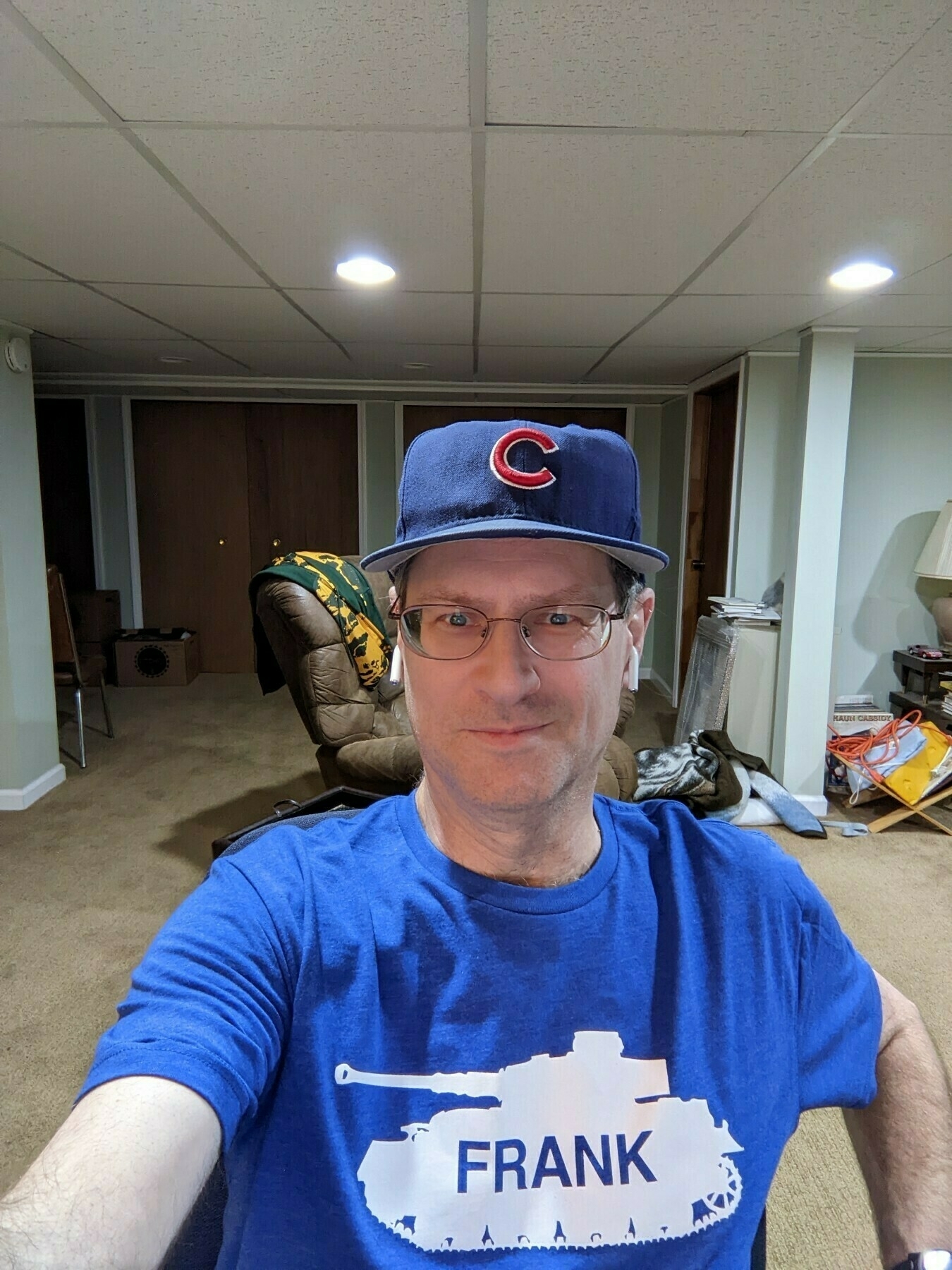 Today the Chicago Cubs, well actually mostly the Cub’s farm system, will play the last 2022 spring training game and will go in to the new season with a winning spring training record. Of course, nobody wins a World Series in spring training, even if my attendance at the 2016 spring training might have propelled the Cubs to win it all that year.

It looks like the Cubs have improved, and I expect they will be competitive enough to make them interesting to watch. One concerning sign from the spring is they allowed more runs than scored, and run scoring (offense) is the big question mark.

Opening day is like starting to read a new book, you don’t know how it will end and you hope that it will be fulfilling.

Every year young men have their dreams of becoming Major League Baseball players come true, but fans rarely see the moment when the dream is realized. Yesterday was an exception as we saw Ethan Roberts being told we was heading to Chicago during the Cub’s spring training game against the White Sox. We need to remember that despite all the money and fame there are dreams lived out.